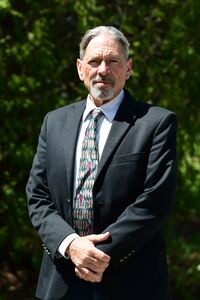 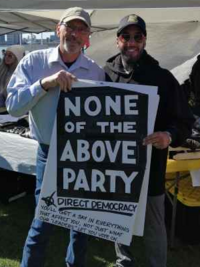 Chris Sky was very keen to hear from David about NOTA Direct Democracy Party concepts and supported this alternative despite being careful to distance himself from and not endorse the Ontario Party candidates at the Windsor Freedom Rally 2022-05-07, because obviously, voting for different tyrants won't solve inherent systemic tyrannical problems. 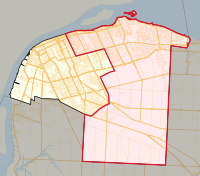 None Of The Above Direct Democracy Party Logo.

This page is for brainstorming for the political campaign of David Sylvestre, as None of the Above Direct Democracy Party candidate, running in Windsor—Tecumseh district's Ontario provincial elections, June 2, 2022, (Thursday).

Fundamental concepts to convey to the masses.

Explain direct democracy: return the power to the people by giving them a say on EVERYTHING - on all issues great and small (not just some issues we're "allowed" to vote on in their rigged systems). The democratic "tyranny of the majority" is vastly superior to the tyranny of the 1% ruling class.

Have compassion, care, and be the FOTPACH (fair, open, transparent, peaceful, accountable, consistent, honest) you want to see in the world.

FOTPACH management (fair, open, transparent, peaceful, accountable, consistent, honest) may apply to all hierarchies, from governments to corporate policies, smaller businesses to social media management, and to any system with laws, rules, or guides.

Leading NOTA and Canada, bottom up

We can wait for the centralized national or provincial None Of The Above leadership to hand down campaign strategies, plans, scripts, etc. - OR - we can seize the day, do it ourselves, and collaborate with other regions with good ideas who may do things similarly or in their own ways.

This wiki, Projex.Wiki, is a powerful tool for local, regional, and/or global projects - including NOTA projects. But this site is not unique and there are other platforms, resources, ideas, and things to communicate. We should compile and organize resource lists to be utilized by all, mirrored on this wiki and other sites.

In addition to campaign strategies, video concepts, etc. I propose we develop a national NOTA style guide to build strong brand recognition, along with a high-resolution image bank of all potentially useful images (ie. candidates, crowds, logos, etc) and how to use them for consistency across all ridings across Canada. (Last year I, Jason Carswell, tried to help the PPC, People's Party of Canada, with some video graphics but they simply weren't organized at all, top to bottom.)

Draft articles and press releases to publish in media and on social media. If corporate media doesn't publish the articles make a big stink about it for more publicity.

Like-minded volunteers as "random" persons on the street ask the questions David Sylvestre wants to answer.

The only difference between other candidates and myself, is that I'm for direct democracy.

I'd like to see everyone have a vote on freedom against tyranny.

I'd like to see everyone have a vote on bodily autonomy - freedom of choice about our individual and collective health care - rather than oppressive sick care.

I'd like to see everyone have a vote on accountable economics.

A Maple Fringe Podcast featuring as many of the smaller indie-party candidates as possible coming together for a few hours of friendly discussion.

A few political parties dominate Canada in lockstep, yet many smaller parties can gain more attention collectively together, in this podcast as well as other activities (such as?).

Full disclosure: Perhaps "Windsor Fringe Podcast" might be a more neutral name. I, Jason Carswell, co-founder of Projex.Wiki, also bought MapleFringe.ca and MapleFringe.com in plans to soon launch a Facebook-like and Messenger-like decentralized social media instance of Movim with private groups and chats for my Windsor, Ontario, Canadian, and global communities to participate, utilize, and self-govern in decentralized systems we all may securely control together. We also plan to have: Reddit-like Lemmy (TruthSeeker.Club and TruthSeeker.Party), YouTube-like PeerTube (Volun.Tube), Google-like YaCy, and many more decentralized platforms - but we need $upport and critically we'll need folks to actually utilize these secure alternative solutions, even if not everyone is expected to migrate completely off technocracy social media.

Like a music video, Windsorites featured in cinematic situations around Windsor collectively edit a video montage together of people performing a cover version of the hilarious satirical Message From Our Sponsor by Jello Biafra of the infamous Dead Kennedys punk band, but who is sadly now a Boomer sellout. Read the lyrics of his extremely slow 3-minute spoken-word performance with poor audio quality, originally released in 1993.

One major consideration is that corporate media may be possessive of their copyrighted lyrics.

We should be certain to record the audio cleanly, ideally with video. We may add audio/video effects in post if necessary. Folks from Windsor Freedom communities may participate and record videos of themselves at various sites around Windsor, either reciting or lip syncing. The diverse footage will be edited together in a montage.

We can modify or omit some of the spoken-word lyrics (ie. dated velvet Quayle).

The more takes that are provided, the higher the quality will be with more options to select from to edit and tweak. It doesn't matter how many bad attempts there are, as long as there is one good one (ie. Marylin Monroe).

The concluding moment of the montage may feature a political candidate saying the last phrase of Message From Our Sponsor - followed by a short blurb to promote themselves. We could keep this concept within NOTA circles or pass it on to other "fringe" political parties. Perhaps all fringe parties of a riding could all appear in it together for wider appeal. Don't forget to mention the election date. After the election the dated promotional stuff at the end can be cut off for a longer lasting message to the people.

There's no reason this concept needs to be limited to Windsor. Feel free to adopt, modify, mutate, and organize this concept for your own region, nation, or planet. Employ dynamic themes, travel the world, shoot in interesting places, with interesting scenarios, props, and faces (with you or instead of you), all to be edited/synced to a single audio track or featuring the individuals.

Jason Carswell had private messaged Chris Sky to invite him to participate in a promotional project, an idea from 6 months ago. Failing to hear back Jason posted an open letter to Chris Sky on Friendevu, the site censored Chris is promoting for free speech. Few folks noticed the Friendevu post.

It may still be possible to include Chris Sky in some versions, with or without politicians and/or Windsorites who may not wish to be featured with him.

Pop culture mashups edited into a maximum impact narrative to wake up the sheeple.

Full disclosure: I, Jason Carswell, will have used or will soon use many of these concepts in my open-source LeverMind Variety Show, currently in production.